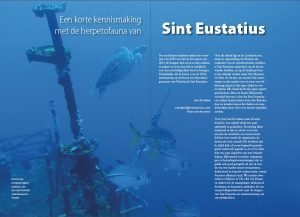 A short introduction to the herpetofauna of Sint Eustatius

During two weeks in October 2016 the author made a diving and herpetofauna trip in Sint Eustatius, one of the Dutch Antilles in the Caribbean. The main goals were diving and snorkelling with two species of sea-turtle, the Green turtle (Chelonia mydas) and the Hawksbill turtle (Eretmochelys imbricata), as well as participating in nest-research at the beaches, in search of hatchlings. Another main goal was participating in monitoring the snake Red-bellied racer (Alsophis rufiventris) at the Quill, the volcano on the island.
From these activities, which were supported by Stenapa, some highlights are mentioned and a description is given of other observed reptiles.
During the snorkelling and diving trips some fish species were observed, such as the Southern stingray (Dasyatis americana), Caribbean reef shark (Carcharhinus perezi), Nurse shark (Ginglymostoma cirratum), stonefish, barracuda, moray eel, and the invasive species lionfish too.
Other species of reptile described are Red-faced ground lizard (Ameiva erythrocephala), Green tree lizard (Anolis bimaculatus), Lesser Antillean iguana (Iguana delicatissima), St. Kitts bank bush anole (Anolis schwartzi), Common house gecko (Hemidactylus mabouia), Island dwarf gecko (Sphaerodactylus sputator) and Flower-pot snake (Indotyphlops braminus).
Two books are recommended for this island (see chapter Literature). Powell et al (2015) can be purchased at the head-office of Stenapa and is a very useful guide for the species encountered.