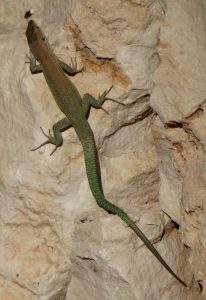 In 2015 the author found several lizards of this complex, of which he was not able to determine the correct species name. The males had no pattern (concolor), the females had the normal dorsolateral stripes for this group. The animals were quite small and slender. Consultation with some herpetologists did not provide more clarity.
Five years later the author received an e-mail from one of them (Geniez, pers. med.), that it was probably a Catalonian Wall lizard, Podarcis liolepis. Concolor morphs have been described for this species, but these animals are larger in size and occur much further north. However, genomic data have confirmed that there is a southern lineage, clearly P. liolepis, but distinct from the northern animals, that is smaller in size and more flattened.