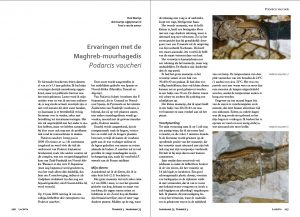 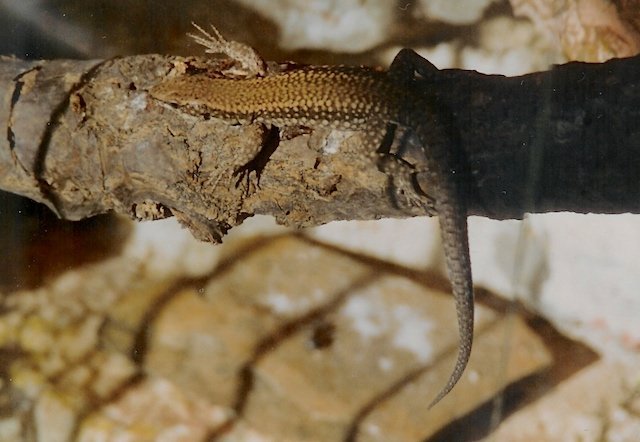 This is a not often kept wall lizard, and not much is known about its husbandry. The author received three animals (2.1) of this species from another hobbyist. These were quite small lizards and they were kept in small terrariums, one pair together and one male alone.

Although not expected the couple mated on July 1 and the female produced four eggs on July 14. The eggs were incubated in vermiculite on top of one of the terrariums, where the temperatures varied from 25° to 32ºC. After one month one of the eggs started to shrink but didn’t hatch. It contained an already dead embryo. The other eggs hatched after some six weeks of incubation. The three juveniles looked lively and healthy. After some months they proved to be two males and one female. They were kept together in a small container, without any territorial problems and they seemed to thrive. After some time they were placed in a bigger terrarium of 40x30x45 cm. In this terrarium one of the males started to become dominant and to suppress its siblings. When the animals were relocated in the old container hostilities seized. They could be kept together for some months, but in the end the biggest male started to become dominant again and was relocated. Now the second male started to become dominant over the female. The female was reunited with the first male, and she was accepted without problems. But in June the next year the juvenile living apart became ill and died, as did the other male. The author never experienced this before, although he kept small wall lizards of different species for many years without problems. The female stayed healthy and thrived.. She was paired with her father, her mother was paired with the other adult male.