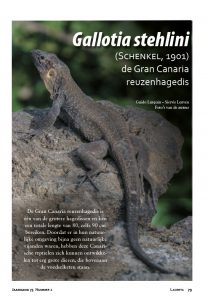 This is a large lizard species of the Lacertidae family from Gran Canaria. They can reach a total length of 80 or even 90 cm. They are endemic to Gran Canaria, although there are a few introduced populations on Fuerteventura. The genus Gallotia is endemic to the Canary Islands. Several species are large, although there used to be several even larger species (up to 1,50 meter), but these are extinct now due to predation by humans and domestic animals in historical times.
Gallotia stehlini is not endangered at this moment, it is a very adaptable species. Consequently, their husbandry is not difficult and they are easy to breed. The adults feed for a large part on a vegetarian diet like fruit and vegetables, although they still need some food like insects, snails and baby-mice. The juveniles feed mostly on insects and other invertebrates, although some fruit and vegetables is accepted too. For the rest their husbandry is comparable with that of other Lacertidae, although they are less aggressive towards each other.