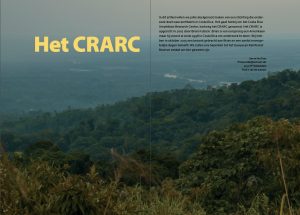 In this article we will tell you something about the Costa Rica Amphibian Research Center (CRARC). The CRARC was established in 2002, and is a small privately owned (Brian Kubicki) and operated biological research center dedicated to studying, understanding, and conserving one of the most ecologically important animal groups of Costa Rica’s humid forest ecosystems, that of the amphibians.
The CRARC is based at the Guayacan Rainforest Reserve which is nestled in Carribean foothills of northeastern Talamanca, near the small town Guyacan de Siquirres. This region has proven itself to be the richest known site in Costa Rica with regard to amphibian diversity, with 66 species being documented (Kubicki, 2008). In the Guayacan Rainforest Reserve you can find 53 species of amphibians.
We stayed at the CRARC in October 2015 for three days and saw a lot of amphibians and reptiles. Every evening we took a hike with Brian to look for amphibians and especialy for glass frogs.