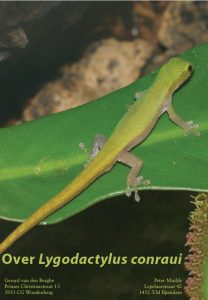 Almost 50 years ago some small green diurnal geckos were send from Nigeria to the Netherlands. These turned out to be Lygodactylus conraui. Breeding was not successful in those years, so no animals or offspring seems to have survived in captivity.

Within a few years one of the authors found the same species in Ghana, although brown instead of green. Their range is from Liberia to Cameroon and Angola.

Recently some animals were imported from Cameroon to the Netherlands, and the other  author keeps a male and two females in a terrarium of 50x50x60 cm, fitted with branches and Philodendron. They are fed small crickets, firebrats and beetle-grubs. Moreover they like Phelsuma-food (Phelsumax).

Together the females laid some fourteen eggs in six months. The prefer to lay their eggs in small tubes like test-tubes, which makes it easy to remove them and place them in an incubator. The hatchlings are very small and need small-sized food accordingly.

This species can be compared to L. williamsi, which is endangered, so it could replace this protected animal in the hobby.