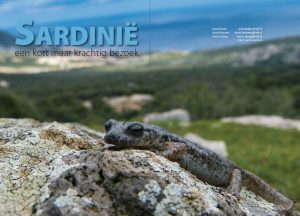 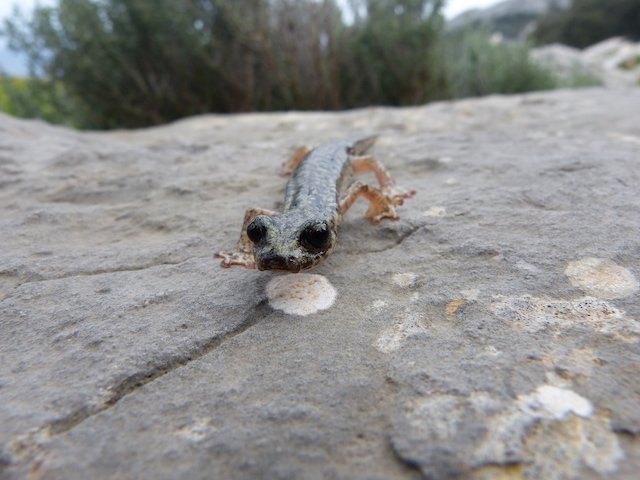 On February 29, 2016, the authors departed to one of the best herpetofauna hotspots in Europe, Sardinia. The aim of this 4-day journey was to find as many species as possible, with a focus on the endemic specialties of the island. Although the intent was non-scientific, we did some interesting observations that contradict, confirm or complement other surveys. We spent the first three days of our trip at the east coast of the island, near the mountainous Parco Nazionale del Golfo di Orosei e del Gennargentu. Here we found our target species, the European leaf-toed Gecko (Euleptes europaea) and the Supramonte Cave Salamander (Speleomantes supramontis), as well as two other gecko species (Tarentola mauritanica and Hemidactylus turcicus), two endemic lizards (Podarcis tiliguerta and Algyroides fitzingeri), a skink (Chalcides occellatus) and two species of anurans (Hyla sarda and Bufotes viridis balearicus). The Moorish Gecko was not recorded yet for this region. The amount of observed cave salamanders was striking, as well as the relatively dry habitat in which they were found. This is probably due to the rainy conditions just before our arrival. At least four out of the seventeen observed salamanders were parasitized by the leech Batracobdella algira, significantly more than nine out of 1380 in a recent study. The last day, we tried to find some new species in the vicinity of Lago Baratz, the only natural freshwater lake of the island, at the west coast. Here, we observed six species, including Discoglossus sardus, Chalcides chalcides and Podarcis siculus, which were new species of the trip. In total, we found an estimated 114 individuals of twelve different species. Some species we missed out were Archaeolacerta bedriagae, Euproctus platycephalus, Testudo hermanni and all Sardinian snake species, giving us enough reasons to return to Sardinia!